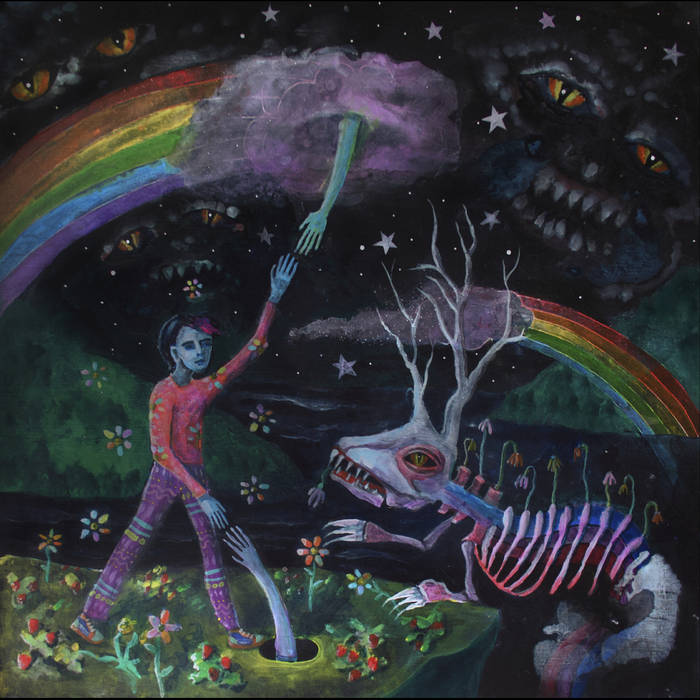 jessethetree i love this hooman

To quote the great Winnie the Pooh,
“ How luck am I to have something that makes saying goodbye so hard”

The outpouring support has kept me grounded & grateful/

Thanks for being real with me,
Love from the cosmic abyss,
Myles

"This album is an unsettling beauty,
an attempt to demystify grieving
with uncomfortable honesty."

"Myles touches on losing loved ones to overdose, and suicide, as well as falling in love and hoping he doesn't screw it up. An emotional integration,
outward confessional therapy, and barebone songs that serve as a powerful meditation on grief and mental health.
It’s deep, emotional, but also playful and filled with hope.
It serves as sensitive and honest in a time of global grieving."

“ this album can be summed up as, Life is like licking honey from a thorn”

Written by Chi Chi Thalken of Scratched Vinyl on December 18, 2020

" Myles Bullen is an artist from Portland, Maine, who has been releasing music for the past decade. Before the pandemic hit, back in February, he released an EP with fellow Portland artist Sarah Violette under the name Planetary Access. Now he’s back with a very personal project, Healing Hurts.

If you’re not familiar with Bullen, his style might throw you for a loop at first, in the way that he’s combining indie rock, folk, hip hop, and neo-soul into its own thing. Once you get into a little bit, you’ll start to see how it’s all coming together to make sense. There are times across the EP where you can see where his music is in conversation with artists like Ceschi, Kimya Dawson, and Kristoff Krane, but most of the time he just sounds like himself. And who is Myles Bullen? Well, on this EP he’s a guy who is desperately trying to get over some specific trauma, losing one person in his life to suicide and another to an overdose, but he’s also just unpacking all the ways in which he’s felt like he didn’t fit in or live up to expectations or deserve to be loved or liked. This might sound like a lot, and it is, but it never becomes overwhelming because Bullen isn’t wallowing in his own misery or looking for pity, he’s just trying to take these steps forwards in his life and using his music to confront these demons and hopefully push himself to take one more step forward. It also helps that Bullen is able to go between singing and rapping much in the same way Ceschi does, opening up to a vulnerable place as he sings, but then drumming up all of his confidence to push forward as he raps. For all of the trauma that is faced on this EP, there is also room for sweetness, such as “Afraid of Love,” with Emma Ivy, where they trade verses about the combination of thrill and terror that comes with taking a chance on love. We also get the rare rap cover when Bullen takes on Eyedea’s “Smile,” which was on his 2009 album, By the Throat. It speaks well to how Bullen reimagined the song and made it his own that I didn’t realize what I was listening to until I went back to the liner notes.

Healing Hurts is a cathartic listen that I think a lot of people could use at the end of 2020. We’ve been through a lot, and it always helps to have some art to help you process those feelings. Myles Bullen has given us something special by giving us a lot of himself with this one."

If you take the head bending lyrical acrobatics of Milo or Aesop Rock and mix them with slightly off-kilter, strained, emotional delivery of Hobo Johnson you have Myles Bullen. The Portland, ME Rapper/Art Poet closed 2020 by releasing his third and most vulnerable album to date. On Healing Hurts, Bullen wears their addiction, recovery, depression, sexuality, and trauma on their sleeve. This collection of seven songs gives the listener the feeling that they’re reading entries from Bullen’s Diary. The album artwork, a painting by Abbeth Russell, is layered, surreal, and gets more depressing the longer you take it in.

The album opens with the project’s bounciest song, “Swallowing Bruises.” The song opens with some strummed ukulele chords, and voices saying things one might expect to hear at their first therapy session, “I’m so glad you’re finally opening up,” and “We’re really glad that you’re here,” etc. Once the beat comes in, Bullen delivers a flow that alternates between being softly melodic to moments with more aggression. This effectively conveys the rollercoaster of emotional ups and downs.

“Suitcase of Sexuality” is the sort of song I think only an artist like Myles Bullen could have created. It’s no secret that mainstream hip-hop has some pretty deep-rooted homophobia issues. We’re starting to see this tide change with openly gay artists such as Kevin Abstract and Lil Nas X. But even these artists don’t discuss sexuality with the same depth that Bullen does on this track. Furthermore, with “Suitcase of Sexuality,” Myles is able to put his undeniable ability to go after a beat on full display.

The beat in “Miss You Daily” is comprised of some bare ukulele chords, a simple baseline, and beatboxing rather than a drum sample. The second half of the track marks a turn into a more experimental sonic pallet. This section features a spoken-word monologue, from what sounds like a therapy session. In this monologue, Bullen breaks the songs fourth wall saying:

“My friend Berry told me he once wrote a piece that he never wanted to end because he never wanted the person he wrote that piece about to ever end. And I feel that now, I don’t ever want this song to stop. Because that might mean I get closure somewhat. The thing about when someone you love dies is that you never get closure, it never ends until, until you do. So I guess that’s the scariest part, is having to live with loss. And then that way, you can never be gone.”

The track’s roughness around the edges compounds the emotion of rawness and vulnerability that lyrics had provided. Although the lo-fi charm of the track sometimes ends up being more distracting than endearing, the song is still a very heartfelt goodbye to a dear friend.

The album closes with what seems to be a voice memo of Bullen playing the ukulele and serves as a reprise of the album’s opening song.
Everyone had to deal with a very trying year, emotionally, mentally, spiritually, and existentially. Hearing Bullen work through the turmoil that 2020 has brought upon us all along with his own personal hardships is sure to remind the listener that we are not alone.
~~~~~~~~~~~~~~~~~~~~~~~~~~~~~~~~~~~~~~~~~~~~~~~~~~~~~~
Album review by TealCheese

We got to know Myles Bullen earlier this year when he released his Mother’s Day anthem “I Love You, Mom”. He showed us that hip-hop and emotions don’t have to be mutually exclusive.
Even when I had only heard that track, I was excited to hear a whole project from Bullen. After putting out another single, he dropped his LP, Healing Hurts in November.
This is an album that is a must listen. I’m glad I waited to put out my Best of 2020 list because this album definitely deserves a spot.

“Swallowing Bruises” tricks you into thinking it will be a typical rap song with the Soulja Boy-esque “YOOU!!” at the beginning. The vocal cadence/flow on verses reminds me of the indie hip-hop group Why?
This is probably my favorite track on this album and has the most replay value for me. The lyrics and plays on words are clever without being too goofy. Bullen switches up his flow consistently and it serves as a real resume within a song.

“Sweetdreams” is a ballad type song. This is one of the singles that Bullen released earlier this year. This song deals with some super heavy topics such as self harm and doubt. This is clearly one of those artists who’s overflowing with empathy. Myles’ genuine nature shines through on tracks like this. The background instrumental reminds me of Arcade Fire or Architecture in Helsinki.
Guest vocals by Emily Bodley fit perfectly and are equal parts haunting and soothing.

“Suitcase of Sexuality” explores the idea of finding our personal sexual identity and dealing with the expectations of others, including our parents.
At this point in the album, this began to feel like Bullen’s personal diary, similar to listening to Mac Miller. There’s a level of frustration here that is calmly communicated and deeply relatable.

“Smile” is a stripped down acoustic hip-hop number. Smiling through personal adversity and bringing light to social injustices in our country are the main themes.
“I can only build if I tear the walls down” is the line that sums up this song best.

“Miss You Daily” is a bit of a heartbreaking track. As someone who has lost people close to me, this is a perfectly eloquent tribute to those who have passed on too soon. This is the longest song on the LP, clocking in at almost 7 minutes. There’s a spoken word interlude that is extremely personal and adds another layer to the emotional onion that is Healing Hurts.

“Afraid of Love” includes the second vocal feature on this album, this time by Emma Ivy.
To me, this is the closest thing to a pop song on this record. This song will force you to calm down and as someone who has anxiety, that’s always appreciated.
Emma Ivy’s verse is unexpected and refreshing. To be honest, this made me look up her Spotify catalog as well.

“Shiny Rock (freestyle)” is the closer on this release and it’s very fitting.
Recorded in more of a demo style, this song really showcases Bullen’s DIY ability. I could totally see him being commissioned to do an indie movie soundtrack at some point. This particular track gave me male Kimya Dawson vibes.

"Hi, my name is Myles and I'm terrified of feelings"

want to say hi?
message me on instagram! @beatboxpoet

Bandcamp Daily  your guide to the world of Bandcamp